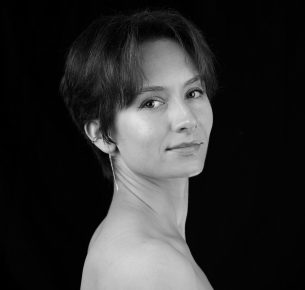 After graduating from the John Cranko Ballet Academy in Stuttgart in 2006, her first engagement was with ballet of the Municipal Theater in Chemnitz. In the season 2008/09 she moved to the Hessisches Staatsballet Wiesbaden/ Thoss Tanz Kompanie under the artistic direction of Stephan Thoss. From the season 2014/15 Hessisches Staatsballett Wiesbaden/ Darmstadt is taken by Tim Plegge and since the season 2020/21 by Bruno Heynderickx. She worked with choreographers such as Jiří Kylián, Hideo Fukagawa, Stephan Thoss, Medhi Walerski, Johan Inger, Richard Siegal, Tim Plegge, Alexander Ekman, Bryan Arias, Jeroen Verbruggen, Edward Clug, Ohad Naharin and many other well-known choreographers. In 2012 she received a nomination as Dancer of the Year in the magazine „Tanz” for her portrayal of Juliet in „Romeo and Juliet” by Stephan Thoss. In addition to her work as a dancer, 2013 Ludmila gained her first choreographic experience with the piece „Between Now and Infinity” to the pulsating music of Fazil Say. In 2019 Ludmila won the Young Choreographers Contest in Bordeaux with her piece „No One” which was created for her colleagues in the Hessisches Staatsballett. Since then, Ludmila creates her pieces for the Ballet of Opera Nationale de Bordeaux and Compagnie Illicite Bayonne.