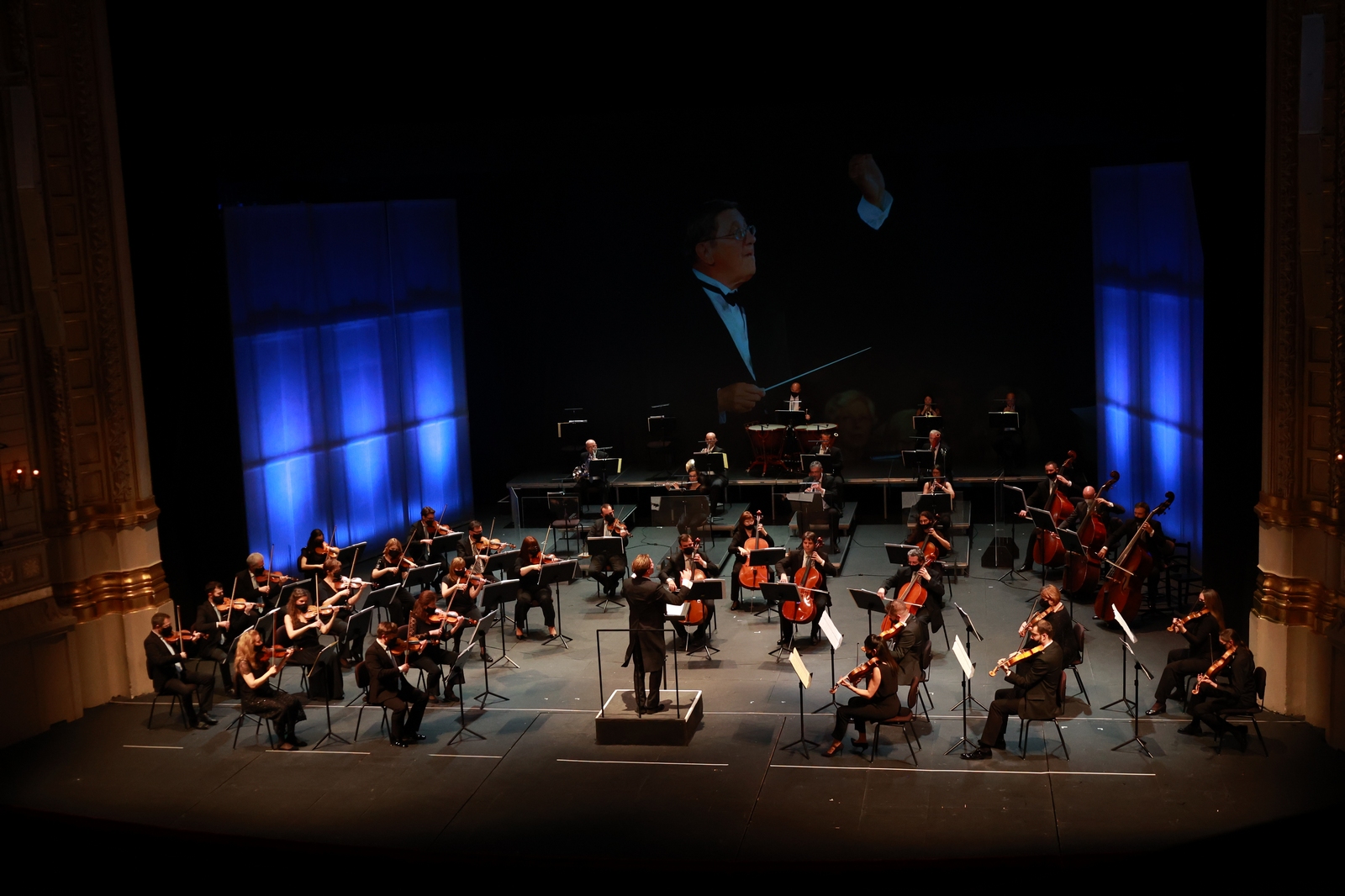 IN MEMORY OF MAESTRO MIROSLAV HOMEN

The symphony concert “Mozart, Strauss: Longing for Eternity” was held in memory of and paying tribute to the recently deceased maestro Miroslav Homen. Before the start of the concert, the intendant of the theater, Marin Blažević, the director of the Opera and president of the Croatian Music Artists’ Society, Filip Fak, and the maestro’s son, Robert Homen, who is also a conductor, said goodbye to Maestro Homen.

At the beginning of his speech, Intendant Blažević pointed out that, unfortunately, the pandemic era we live in dehumanizes us in many ways, even in relation to death and when we have to say goodbye to our loved ones in silence. He then recalled Maestro Homen’s Rijeka years, his arrival from wartime Sarajevo in 1992 at the Rijeka National Theatre where he was director of the Opera for two seasons and chief conductor until his retirement in 2006, and where he achieved some of his greatest professional successes.

“Instead of a minute of silence, we will say goodbye to the maestro the way I believe he would prefer: with a performance of the concert and with loud applause at the end,” said Marin Blažević.

Filip Fak, the director of the Opera, emphasized that maestro Homen was a self-denying artist who gave a lot not only to Rijeka, but to all of Croatian culture.

“I remember the maestro from my childhood; when I was still a child I watched how he conducted, and it was under his conducting that I made my solo debut. I am therefore emotionally attached to him; it was with him and under his professional leadership that I went into professional waters,” recalled Filip Fak and pointed out that the Rijeka Symphony Orchestra thanked Maestro Homen the right way, by performing a symbolic concert of two Mozart symphonies and Strauss’s Metamorphoses and Concerto for Oboe.

Robert Homen singled out his family’s arrival in Rijeka from among his memories. “Rijeka was not accidental; my father chose it. As an excellent conductor who worked throughout former Yugoslavia, he had invitations from many cities, and he chose to come to Rijeka. A few years later I asked him: ‘Why Rijeka?’

‘Son,’ he answered, ‘Apart from the fact that the sea is important to us as Kotorans, while we were hiding from the grenades during the war, the people who called and cared for me the most every day were friends, musicians from Rijeka.’ That emotional moment was crucial for coming to Rijeka, where he realized some of his professional desires; for example, he conducted Verdi’s Don Carlos for the first time, which meant a lot to him,” said Robert Homen. ‘The way he was at the conductor’s stand was also the way he was as a father. Fair, knowing how to praise and rebuke when needed, but full of love and understanding. He was always supportive and strong for the musicians he worked with who loved him, as well as for my brother and me.”

After this, the first bars of Mozart’s First Symphony sounded, followed by two works by Richard Strauss and Mozart’s final Jupiter Symphony at the end of the concert, performed by the Rijeka Symphony Orchestra led by chief conductor Valentin Egel. The solo performance of oboist Antonio Haller was met with a standing ovation by the audience.

Here is what they said after the concert:

“In one piece, Antonio Haller seemed to merge with the oboe, as did the whole Orchestra.”

“They were all so lively, the conductor and Antonio Haller, as well as the entire orchestra. Wonderful!”

“Wonderful. I actually haven’t been to the Theatre in a long time. After such a long confinement at home, it was just what my soul needed. They are excellent!”